All Collections
For Developers
File Formats
Introduction to File Formats

Written by Cesar Garcia
Updated over a week ago

Transifex supports over 46 localization file formats. You can learn more about each one by clicking on their respective link in this section.

If you use a file format that's not on the list, let us know, and we may be able to help you.

For most file formats, Transifex uses UTF-8 encoding. This means files you upload to Transifex must be encoded in UTF-8, and all files downloaded from Transifex will be in UTF-8. There are some exceptions in cases where a file format specification requires a different encoding. For example, JAVA .properties files use ISO-8859-1, and Apple's .strings files use UTF-16.

For every file you have, you can download a different version depending on your needs. These different versions are called modes. They come in handy in several different situations. For example, a developer may want only to use reviewed translations. Or, a translator may wish to translate a file offline using their desktop tool.

These are the available modes when using the Client or the API:

Some file formats will take untranslated entries and fill them in with source strings. So if you use one of the modes mentioned above, you'll get a file where the untranslated strings won't be empty. There are several modes that you can use to bypass this rule. They're available when using the API.

This mode is only supported for the following formats: Android, KEYVALUEJSON, PO, Properties (Java Properties), QT, SRT, Stringsdict, and YML.

For all other file formats, use the translator mode to get a file that leaves the untranslated entries empty. For some formats, such as Java .properties, the downloaded file will have the source string in the comment so the translator can translate the file faster.

When using the command-line client, you can specify the mode of the file you want to download with the --mode option of the tx pull command. 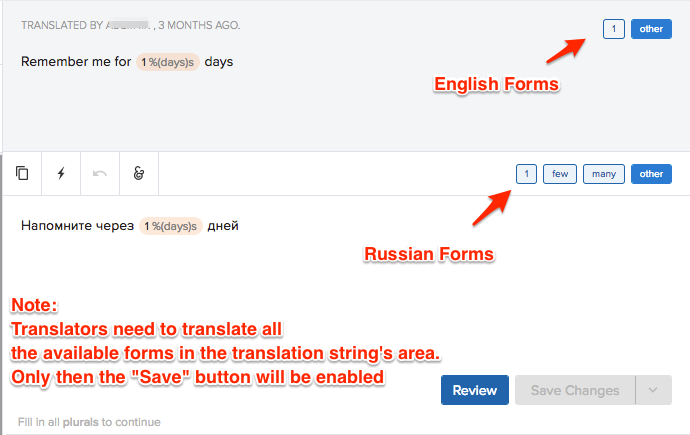 Below is the metadata (developer notes, character limits, tags, context, and occurrence) supported per file format. The table does not include file formats that do not support any of the metadata. 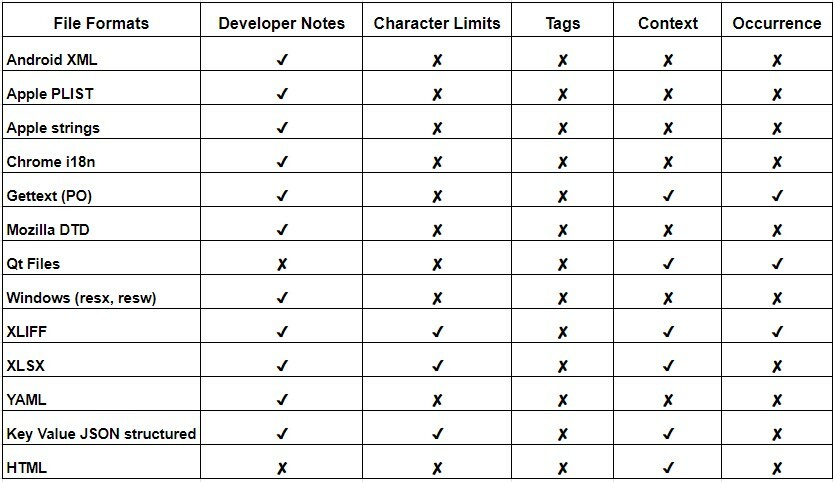 Every project in Transifex has a set of resources. Each resource corresponds to a source file. If, for example, you have a project with two files for translation, foo.pot and bar.pot, you will need to create two different resources (e.g., foo and bar) and map each to the corresponding translation file.

Transifex will extract the source strings using a parser suitable for your i18n format and store them as translations of the source language when you upload the source file. Then, you can translate these strings into even more languages (target languages) by using the web editor or by uploading a file.

The engine in detail

At the core of the Transifex translation storage engine are Source Entities. These are representations of actual translatable objects, together with their metadata, like comments.

For gettext PO files, a source entity corresponds to a msgid entry together with all the metadata it carries (context, occurrences, comments, etc.).]

Each entity has Translations to several languages — including the source language. A 1-1 relationship exists between an entity and a translation in a particular language. So, if you upload a fresh POT file with one msgid inside, you will end up with one source entity and one translation for English.

Transifex internally will remove the source strings and replace them with a hash when you upload a source file. Transifex will use that hash to insert the correct translations for the requested language when you download the file. In essence, you're downloading the English file with the English content of it replaced with French content.

Here are the steps are taken when you create a new resource by uploading a new source language file:

When you upload a file, e.g., a French file, Transifex goes through all translations, locates the respective Source Entity, and updates its translation. Then the file is deleted. This means that any content which may not be supported by Transifex (such as arbitrary comments in random locations in the file) might not be preserved.

Transifex will take the template file and substitute all hashes with the French translations when you request to download the file in a specific language. Transifex can export different files based on the mode you specify.