Written by Ryan
Updated over a week ago

YAML is a human-friendly data serialization standard for a number of programming languages.

When you upload a YAML file to Transifex, be sure to select the i18n type that corresponds with your YAML file.

Differences between the two types of YAML files

While the two types of YAML files share many commonalities, there are some important differences to call out.

Transifex lets you download different versions, or modes, of a YAML file to match how you’ll be using the file:

For all the modes above, comments from the original source file are included in the downloaded file.

There are additional modes available through the API. When using the onlytranslated and onlyreviewed modes, the translation file will include only the translated or reviewed strings — everything else from the original YAML file is removed. This means that comments, keys for untranslated/unreviewed strings, and keys with no translatable value will not be included.

And then you translate value1 and translate and review value2 for Greek (el). If you download the translation file for Greek using the onlytranslated mode, you'll get:

And if you download the same file using the onlyreviewed mode, you will get:

How source string keys are determined

The unique source string key in a YAML file is created by going through the YAML structure from the root key to the specific string value and appending each key to the previous keys, with a . acting as a separator. When there's a list element, we use the list index surrounded by square brackets [ ] as the current key.

Let’s say you have the following source YAML file:

This will produce the following key-string pairs:

In the example below, the comment "This is a comment for Libraries" will be associated with the entry "Libraries.”

Multi-line comments such as the one below are supported as well:

Indentation in the original YAML file is detected and preserved in the translation files produced later. Transifex detects indentation by examining the first keys of your file so it’s best to keep the indentation in your YAML uniform.

Anchors and aliases, which are denoted with the & and * symbols, respectively, allow you to reuse parts of a YAML structure. Aliases are ignored when found in the YAML document in order to not produce duplicate strings. Aliases and anchors are preserved in the translation file though.

For example, the following YAML snippet:

Won't be expanded into its equivalent:

because first element and second element will appear twice.

Only the following two strings will be in the Editor:

For Rails-compatible YAML files, the different plural forms for the same string are grouped together.

If you had the following English source file:

There will be two strings in the Editor, each with two plural forms:

Extra plural rule keys are allowed as long as all the required plural rules for the language are present.

Let's say you had the following snippet for the English, which only supports the "one" and "other" plural rules:

The string in Transifex will be pluralized but the "zero" key will be ignored. Its value won't be visible in the Editor and will be excluded from the downloaded file. Please note however that including the "zero" key in the source file will generate an error in Ruby on Rails when it tries to pluralize a string with an untranslated "zero" plural form.

If a node contains extra keys that do not correspond to a valid plural rule, i.e. keys other than ["zero", "one", "two", "few", "many", "other"], the node won't be parsed as a pluralized string and each key will be parsed as a separate string, even if the required plural rules are there.

As an example, for this snippet:

the following strings will be available in the Editor:

For generic YAML files, no entry is treated as pluralized.

The same English source file from before will produce four separate strings in the Editor:

Multiple line strings can be written either as a literal block using | or as a folded block using >. The style of these strings will be preserved in the translation file.

If you had this literal string:

It'll appear like this in the Editor as a single string:

If you had this folded string:

It'll appear like this in the Editor as a single string:

Strings wrapped with single quotes or double quotes in your source file will keep the quotes in the translation file unless this results in an invalid file. In that case, the quotes are replaced with a different style of quotes. Quotes are hidden in the Editor to make translation easier.

Will produce the following three strings in Transifex:

Transifex treats each item in a sequence or list (denoted with a - at the beginning of a key) as a single string and hides list markers in the Editor. Both block and flow style sequences are treated the same.

Nodes can specifically be typed, using YAML's built-in types or custom ones. Both YAML_GENERIC and YML parsers can handle any translatable content that is marked as a custom typed variable using tags. We store custom tags in context field in the editor. This information is preserved upon export, every time you request the file back.

Under the context tab in the editor, the following information will be available: 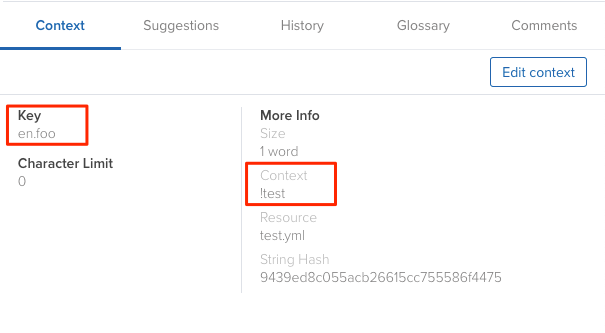 Custom tags are added back to the compiled files when one of the following download modes is used: default, reviewed, translator.

However, custom tags are not included in the compiled files, when one of the following download modes is used instead: onlyreviewed, onlytranslated

The following table outlines what occurs to untranslated, unreviewed, and un-proofread strings when using the API, CLI, or UI to manipulate translation files. This table is for YAML_Generic:

The following table is for YAML Ruby on Rails:

* Proofreading needs to be enabled as an option for this logic to take effect. To learn how to enable proofreading click here.