Working with Plurals and Genders

Work with advanced features of ICU such as plurals and genders.

Written by Antonis Mylonas
Updated over a week ago

Also, the most important and frequently-used features of ICU can be supported in other file formats in a non-ICU way, such as plurals, context, and developer comments. Depending on the file format you use, you can access some or all of these features.

You can use PO files as a good way to work around this. It is one of the most popular file formats for localization, supported by many frameworks. It's quite powerful and we have good support for it.

PO files can support context and also developer comments, if you want to bring that info straight from the source file. If, in addition to plurals, you have genders, you can use the context field (msgctxt) to indicate the gender. You can also use the developer comment (#.) to explicitly tell the translator how to translate the string.

Here is an example, showing the same source string but using the context to save two different entities in Transifex.

Viewing Genders in the Editor

Another way to specify genders is through the key name. Transifex will recognize the words, Male or Female, in a key name and display a label in the editor that shows the gender. For example, if you have the following entries in a PO file:

Then the following will appear in the Transifex web editor: 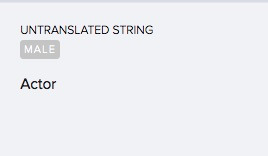 This same concept is applied to all file formats with a key-value structure.

Pluralized strings can also be defined in a PO file as follows:

How pluralized strings are handled by Transifex

As an example, English has 2 plural forms ("one" and "other"). The source file will have two phrases, one for each plural form. On the other hand, Russian has 4 plural forms. So, after the translations are done, when you download the file from Transifex, your translation file will look as follows.

Transifex is following ISO Standards and Unicode CLDR data for the supported languages, as you can read in our documentation.

You can also take a look at the rules we follow, for defining the plural forms, here.

Here is an idea on how to use the TM with plural-enabled entities.

We love the concept and idea behind ICU. It's a powerful framework when you have very advanced i18n needs. It's also a neat way to store the actual phrases in the engine itself, instead of having multiple fields. More fluid and dynamic, easier to work with as a developer.

So why aren't we natively supporting ICU and suggesting workarounds? Here are some of our thoughts on this.

ICU affects a very small percentage of users and phrases. Very, very few of our users' phrases are pluralized (eg. you rarely see plurals in marketing and user-generated content). From those few users, very few need to also support male and female versions. And out of those, less than half are willing to put the effort to support it in their code.

ICU is also a quite complex framework. The phrase itself is no longer plain English but has variables and logic in it. That's a fundamental difference, it's like replacing your house's bricks with a brick that can grow in size with a button. The change affects every single piece of a localization system like Transifex. Some examples are the Translation Memory (serializing entries when updating a TM of billions of entries is no joke!), the word count across the platform, etc.

Finally, as outlined on this page, you can support the most important ICU features with Transifex already, such as plurals.

Properly supporting ICU would mean an overhaul of many core components in Transifex. Based on the above, we are putting this functionality on hold and we will revisit it in the future once we get more customers asking for it.

Getting started as a Localization Manager

Getting started as a Linguist

Getting started with Transifex Native