Upload a glossary to Transifex through a CSV file.

Written by Chris Chatzi
Updated over a week ago

If you already have a glossary, you can import it to Transifex by uploading a CSV file with the terms. Your file can be used to create a new Glossary or update an existing one.

To ensure data from your glossary will be correctly mapped to Transifex, you'll need to structure your CSV file in a specific way. Here's an example of a file that can be successfully imported:

Here's what the columns and column headers mean:

Add more columns with the language code as the header to include translations for additional languages.

Terms with a comma (ex, "Transifex Live, a Transifex solution") are handled fine if the glossary is created/updated using Google Spreadsheets.

Once imported, the term will look like this inside Transifex: 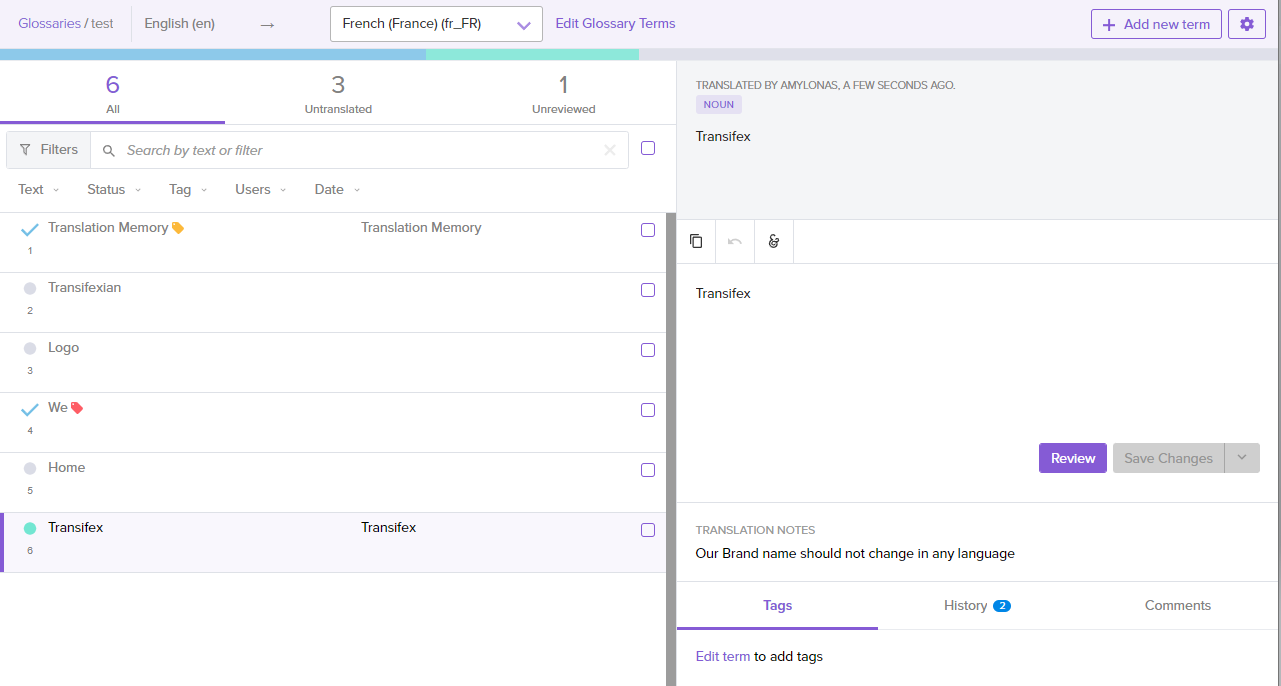 Sometimes it's helpful to use a spreadsheet to create and format a Glossary and then save it as a CSV file. You should make sure that the exported file is encoded in UTF-8. Recent versions of Excel support exporting CSVs in UTF-8, but it's hard to ensure they did it correctly. You can use an editor like Atom or Sublime, open the file with the correct encoding, and check if the characters look OK.

To be sure, we recommend using Google Spreadsheets, which handles the exporting perfectly.

If you already have an Excel file, you can upload/open it with Google Spreadsheets and export it into a properly-encoded CSV.

This solution also fixes the case where your upload fails with the following message: "new-line character seen in unquoted field - do you need to open the file in universal-newline mode".

When you have a term that appears twice in your CSV file with the same part of speech (POS) but different notes or translations, Transifex will only upload the second instance of the term. The first will be ignored.

term, pos, notes, translation_fr Account, noun, A report or description of an event or experience, Compte Account, noun, A statement of financial expenditure and receipts for a particular period or purpose, Compte

To add two instances of a term to the glossary, add a (1) after the second instance of the term, as follows:

term, pos, notes, translation_fr Account, noun, A report or description of an event or experience, Compte Account (1), noun, A statement of financial expenditure and receipts for a particular period or purpose, Compte

Only the first instance of the term will appear in the Editor. However, both instances will be available from within the Glossary itself. So, if you want your translators to be aware of the different ways a term could be translated, you can ask them to check the glossary.

Alternatively, if you have the same term with two different translations, you can differentiate them with a unique part of speech, and both strings will appear in the editor.

For example, if you have the term "hello", you can add two translations in the glossary; one as a verb and the other as an adverb. Since the same term has a unique POS, they will both appear in the editor.

Once you've formatted your CSV file, upload it to Transifex to create a new glossary:

After creating the glossary, you'll need to associate a project with it.

Kindly check the following things are done correctly to upload the glossary successfully:

Glossaries in Transifex can also be updated via a CSV file.

To update an existing glossary: